Find yourself in the ancient emerald forests of the island and experience the exhilaration of dramatic summits, the utter tranquillity of untouched nature, and the soul of the Haida People.

Haida Gwaii, literally "Islands of the Haida people" is the heartland of the Haida Nation, outside of which some Kaigani Haida live on the traditionally Lingít island of Taan in the U.S. state of Alaska.

Formerly known as the Queen Charlotte Islands and the Charlottes, the islands have been home to Haida, who make up approximately half of the population,for centuries

Haida Gwaii consists of two main islands: Graham or North Island in the north and Moresby Island in the south, along with approximately 150 smaller islands.
Haida Gwaii is great for hardy adventurers, sports enthusiasts, or individuals, couples, and families who simply want to holiday in a relaxing environment and soak up culture.

Haida Gwaii offers endless recreational opportunities such as fishing, hiking, and camping in and around protected parks and reserves of diverse wildlife and flora. It's also the only place in all of Northern British Columbia where travellers can surf.

Aboriginal sites and remarkable works of art make for interesting exploring. Check out the many traditional totem poles and sculptures that stand proudly in many of the communities, and visit the Haida Heritage Centre in Skidegate.

The islands are home to an abundance of wildlife, including the largest subspecies of black bear and also the smallest subspecies of stoat. Black-tailed deer and raccoon are introduced species that have become abundant. 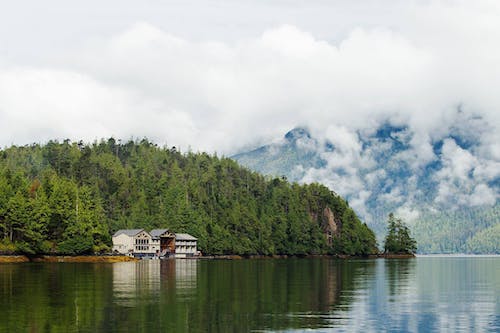