Pender Island is one of BC’s laidback, picturesque southern Gulf Islands.
Still retaining a bucolic rural feel with its historic farms and port communities, Pender offers lovely waterfront parks, rolling countryside perfect for cycling, a lively arts scene, and a full slate of water activities.
Factor in good dining, several spas, and plentiful accommodations (ranging from affordable to deluxe), and it's no wonder this island gem is popular with stressed out urbanites. "To see the beauty in the air, the ocean and on land," says Pender photographer Jacquie MacDonald, "take a few quiet seconds to let it all sink in."

One Island Made Two

Pender is referred to in the singular by its Chamber of Commerce even though the island was separated into northern and southern halves in 1903. With construction of the Panama Canal a hot topic in the US, islanders petitioned to improve local navigation by having a humble canal of their own dug across a narrow neck of land dividing Bedwell and Port Browning harbours.

As a result, North and South Pender were separated for the first half of the 20th century. A one-lane bridge reconnected them in the 1950s and today the debate continues over singular and plural nomenclatures. The phrase of choice for the post office and most Penderites, however, is a simple, geographically and geologically honest Pender Island.

About 90 percent of the island’s 2,300 residents live in its upper half. Pender’s commercial hub (aka the Driftwood Centre) is here along with century old farmsteads, the pioneer communities of Hope Bay and Port Washington, the Otter Bay ferry terminal and Magic Lake Estates (which back in the 1960s was Canada's then-largest-ever subdivision).

By contrast, South Pender is forested and sparsely populated with houses strung along a few winding roads hugging the shoreline. Two significant portions of the widely scattered Gulf Islands National Park Reserve occupy much of the landmass, notably Mount Norman and Beaumont Marine Park. The busiest spot south of the canal is Poet's Cove, site of the major-league resort and marina of the same name plus a floatplane dock and Canada Customs office.

A Haven for Creatives

The Penders (another popular usage here) attracts more than its share of artists, musicians, writers and other creative minds. Take a do-it-yourself tour of the 30 or so home studios or hit the galleries in Hope Bay and the Driftwood Centre for a quick one-stop fix. The island’s remote, uncrowded beaches are great places for visitors armed with sketchpads, writing journals, and unread novels. Cameras are also handy in documenting otters, seals and, once in a patient long while, a passing pod of Orcas (best seen when sitting at a picnic table on the Thieves Bay breakwater).

"What’s the hurry?" reads a favourite island bumpersticker, "I’m on Pender time." The island’s friendly character and volunteer spirit is reflected in its pioneering "car stop" transportation initiative, which sees Penderites offering lifts to strangers at designated points.
A stressbusting holiday begins for most with an ocean cruise aboard BC Ferries. Once here, lazy days usually involve beachcombing at any of more than three dozen ocean access points, a bike ride, and perhaps a yoga class or massage. Summers are busy with the Saturday Farmers’ Market, one of BC’s earliest seasonal Fall Fairs (in mid-August) and special events like the Winestock wine and music festival at the Morning Bay Vineyard. One winter highlight is the New Year’s lantern festival at Magic Lake. 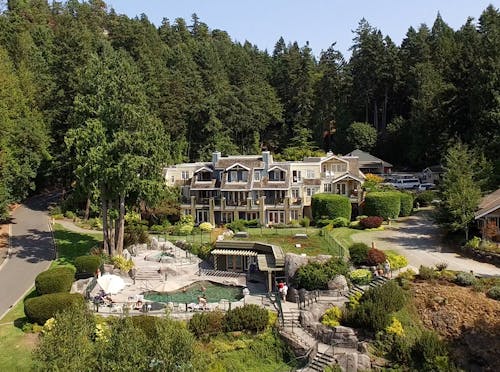