Missionary Jacques Marquette and explorer Louis Jolliet were probably the first white men to come to Illinois. The word Illinois comes from the French version of an Indian word meaning "men" or "warriors." Illinois is nicknamed the "Prairie State" because the region once had many treeless plains covered with tall grass.

Illinois is an East North Central state bordered by Wisconsin to the north, Indiana to the east, Kentucky to the south, and the Mississippi River on the west. It is the most populated Midwestern state. It has become an important state because its central location south and west of Lake Michigan makes it close to both raw materials and markets. Illinois is a continental centre for business and travel because of the many transportation routes that run through it including railroads, highways, waterways, and air routes. The Illinois Waterway connects Lake Michigan with the Mississippi River and the Mississippi River with the Gulf of Mexico. O'Hare International Airport is the world's busiest airport.

Illinois is a leading urban, agricultural, and manufacturing state. Chicago, Illinois' largest city, is an important shipping centre on Lake Michigan. It is also the home of the Chicago Board of Trade, the world's largest grain market. Because of it size and output, Chicago was known as "America's Second City" until the mid-1980s when Los Angeles passed it in population. About half of the state's residents live in and around Chicago.

Chicago is also known as the "Windy City," because its residents bragged about it so much. The nickname stuck because of the gusts of wind that blow across the city from Lake Michigan. In fact, by New Years, the fierce wind makes the temperature seem like 50 degrees below zero F (wind chill factor). If you're in Chicago, take in an incredible view from the Skydeck Observatory of the Sears Tower, one of the world's tallest buildings. Other important cities in Illinois include Peoria, Rockford, and Springfield, the capital.

Below is a small selection of the USA holidays we offer featuring Illinois. Call us for more.

Planes and Boats and Trains

Route 66 Best of the West

Below is a small selection of cities we have on offer in Illinois. If you want to visit elsewhere, just give is a call. 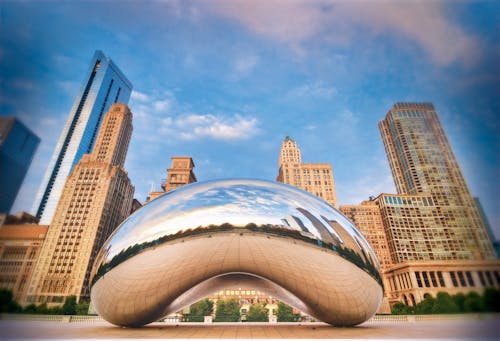