Yogyakarta, is the cradle of civilization on Java. This city was the seat of power that produced the magnificent temples of Borobudur and Prambanan in the 8th and 9th century and the new powerful Mataram kingdom of the 16th and 17th century.

This city is one of the foremost cultural centers of Indonesia. From strolling through the living museum of The Kraton or The Keraton (Sultan’s Palace), to hanging out at the famous Alun Alun, to watching silversmiths produce amazing jewelry at Kotagede and maybe try a splurge shopping up at Malioboro road.

For culinary wonders, don’t forget to try the Gudeg first, special cooking of traditional Javanese recipe that is iconic to this city. The Bakpia, is a traditional snack with many enticing flavors that are popular for souvenirs. For a beverage, you can try the Jamu, a natural herb mix beverage based on ancient tradition used for natural remedies.

Batik is the national treasure based on Javanese word of “amba” and “titik”, meaning to write the dots. It is an art of decorating fabric using wax and dyeing process. Yogyakarta has a signature batik pattern that are usually made with a bright white basic. Some of the motifs are namely The Parang Kusumo, Kawung and Truntum, each was created with the special philosophy behind its every dots.

Singapore, The Best of Java & Bali

Below is a selection of the Yogyakarta hotels we offer on our Indonesia holidays. If the the hotel you would like isn't listed, just give us a call. 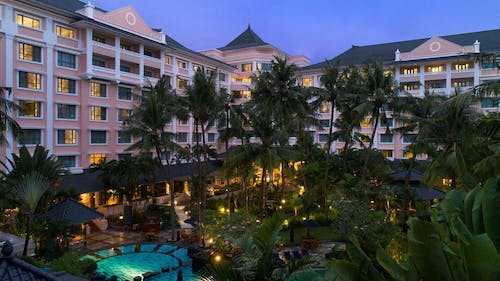