Located on a curve of the Mekong River, Vientiane has a recorded history that stretches back to around 1,000 AD. The area was originally settled because of the fertility of the surrounding alluvial plains, and Vientiane became the capital city of Laos around the mid-16th century.
Vientiane is the home to the most significant national monument in Laos: That Luang (Great Stupa), which is the symbol of Lao and an icon of Buddhism in Laos. Of the many beautiful Wats in Vientiane, a visit to Wat Sisaket is a must; built in 1818, this is one of the oldest temples in Vientiane. Other Buddhist holy places are Wat Ong Teu Mahavihan, known for its 16th century bronze Buddha sheltered by a carved wooden masterpiece, and Wat Si Muang, the site of the Lak Meuang or pillar-stone of Vientiane. Wat Si Meuang is also home to the guardian spirit of the city. Hor Phakeo, across the street from Wat Sisaket houses a beautiful collection of Buddha statues, including traditional Lao style of the “Calling for Rain” and “Offering Protection”.

The cosmopolitan capital of Laos, Vientiane, has galleries, boutiques, theatres, nightclubs and internet cafe, making it a major attraction for visitors from all around the globe. Although the city is small, it offers visitors a great variety of restaurants serving both Lao and foreign cuisine. When you get hungry try the nation’s signature dish, tam mak-hung (spicy green papaya salad),  laap (spicy minced meat salad) and ping kai (fried chicken). Quench your thirst with a refreshing Beer Lao or fresh fruit shake from one of the many small restaurants found along almost every street in town. At dusk, find a spot along the Mekong promenade to enjoy an amazing view of the sunset over the river.

Below is a selection of the Vientiane hotels we offer on our Laos holidays. If the the hotel you would like isn't listed, just give us a call. 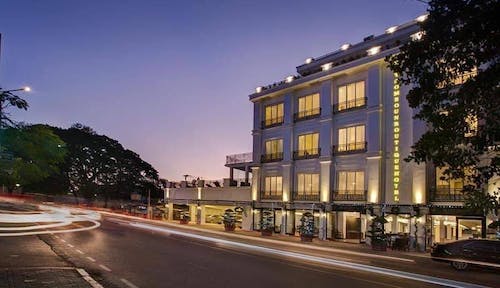 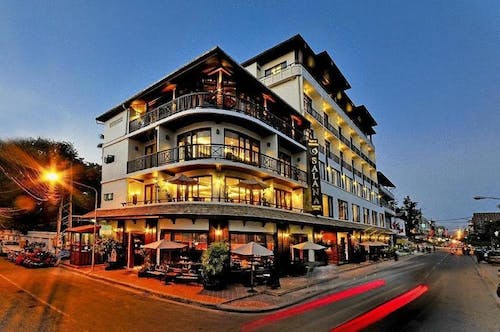