Bagan, an ancient city located in the Mandalay region is one of the most visited places by tourists in the country. The city served as the capital of Myanmar from the 9th to 13th centuries. It was the capital of the Pagan kingdom, the kingdom which unified regions that constitute the Myanmar of today. The Bagan Archaeological Zone is the main attraction of the country and is one of the richest archaeological sites in Southeast Asia. Situated on the eastern bank of the Ayeyarwady River, the temples of Bagan leaves one awestruck.

Bagan has approximately 2000 ancient monuments and pagodas strewn all over Bagan. The monuments are located on the land between the riverbank and the Turintaung range. Although Bagan is most famous for its historic monuments, it has a lot more to offer. Tourists can visit nearby local villages and watch people weaving cotton. Bagan is famous for ancient craft, especially in lacquer. It is also famous for its mural painting, oil processing and palm sugar production.
One of the best ways to see Myanmar is to take a river on the Ayeyarwady River, the longest and the most important river in Myanmar. You can enjoy a relaxing and comfortable cruise on the river. Places such as Mt. Sagaing, Pokokku, Myingyan and other well-known cities are accessible from Bagan through boats.

Below is a selection of the Bagan hotels we offer on our Myanmar holidays. If the the hotel you would like isn't listed, just give us a call. 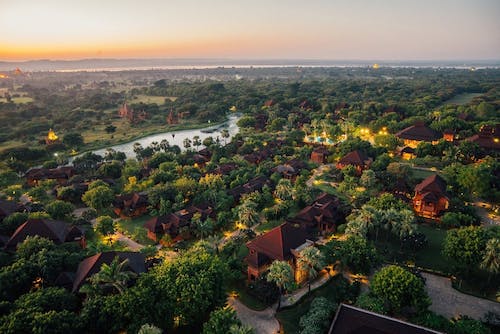