Mandalay is the second-largest city of Myanmar, located on the east bank of Ayeyarwady river and is regarded as a cultural centre of the country. The city is named after the nearby Mandalay Hill. It was founded at the foothills of the Mandalay hill in 1857 by King MindonThe city served as the capital of the country until its final annexation by the British Empire in 1885. From the ornate royal palace to breathtaking sunsets over the river, it provides a thorough glimpse of the culture of Myanmar and its people.

With an important history behind it, Mandalay takes the traveller back to the 19th Century when the city was formed. Evidence of this rich history can be seen in the royal city which houses the magnificent palace complex which was devastated during World War II. Tourists can also visit the Mandalay Palace which was the last palace built by Burmese royals, located at the heart of Mandalay it is surrounded by moat and wall. Another significant monument to visit is the gigantic Mingun Bell stupa located near the city. Mandalay also hosts a number of Monasteries and Pagodas of historical significance.
Myanmar is often regarded as the cultural centre of the country and rightly deserves the name. Apart from the innumerable cultural monuments and historic buildings, Myanmar is also home to several art and craft centres. Travellers can visit the stone carving workshops near the Mahamuni pagoda and watch artisans at work. The Mandalay region is famous for its woodwork and tourists are welcome to visit wood carving workshops.

Below is a selection of the Mandalay hotels we offer on our Myanmar holidays. If the the hotel you would like isn't listed, just give us a call. 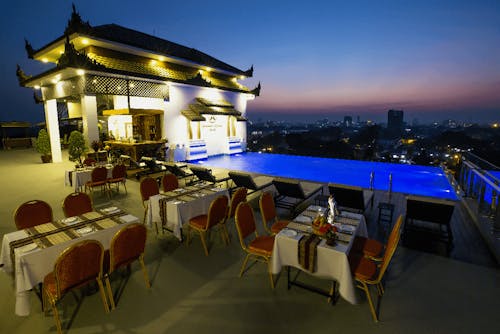