Franz Adolf Eduard Lüderitz, a merchant from Bremen in Germany founded the town of Lüderitz, named after himself, in May 1883. The town lies next to an open, natural ocean bay, one of very few along the so-called Diamond Coast.Touristic highlights are some of the well maintained old houses from the German colonial times, build in Wilhelminian Art Deco. Also remarkable is the amount of appealing coastal beaches, especially the Big Bay and many sandy bays and lagoons. At the Halifax Island penguins and flamingos can be seen.

After becoming one of the richest towns in Africa during a diamond boom in 1910, Kolmanskop was left by all inhabtants in the following decades. Kolmanskop became a ghost town in the desert.

Situated only 15 km east of the harbour town of Lüderitz, Kolmanskop used to be a small railway station in 1908, when the railway between Lüderitz and Keetmanshoop was built.

In 1908 the railway worker Zacharias Lewala found a shiny stone and took it to the chief railway foreman August Stauch. The news of diamonds soon spread and a real dia-mond fever developed, as hordes of diamond seekers and adventurers settled in the area. Within two years at a rapid speed an unparalleled town development took place; within a few years Kolmanskop became the richest town of Africa and one of the richest towns worldwide. The thereby developed infrastructure was unmatched at the time; as from 1911 the town had electric power, luxurious stone houses, a casino, a school, a hospital, an ice factory to produce ice for fridges, a theatre, a ballroom, a sport-hall, a bowling alley, a salt-water swimming pool and much more although less than 400 people lived here.

With the outbreak of the war in 1914 the production was nearly zero and with the loss of the German colony the Ger-man Era of diamond mining came to an end and was taken over by South Africa. The town was left to its own devices and the desert claimed its lost territory back. The last inhabitant left Kolmanskop between 1956 and 1960.

Below is a small selection of the Luderitz hotels we offer on our Namibia holidays. If the hotel you require is not listed, just give us a call. 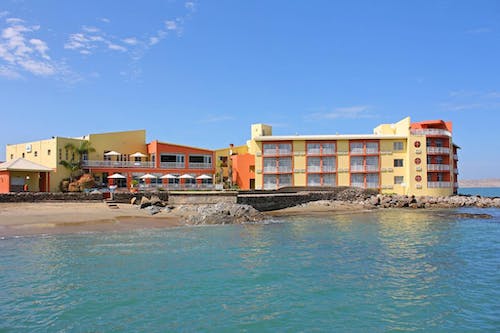