The Kalahari Semi-Desert forms the largest coherent sand plain worldwide. The Kalahari is part or a huge sand basin, the Kalahari Basin, that stretches from the Orange River up to Angola, in the west well into Namibia and in the east into Zimbabwe.

The Kalahari is described as a semi desert, as the annual precipitation receive is between 100 mm and 650 mm. Real deserts like the Namib Desert are defined by a annual precipitation not more than 50 mm. Thanks to the higher rainfall the Kalahari boasts a very diverse flora and fauna. However, due to the thick sands surface water only accumulates in the so-called vleis. Thanks to its diverse and unique flora and fauna, large parts of the Kalahari have been declared as nature conservation areas, for example the Kgalagadi Transfrontier Park, the Central Kalahari and the Okavango Delta.

Most of the natural vegetal cover in the Kalahari, especially grasses, shrubs and acacias, is able to survive an 8 – 10 month long dry period. The wildlife is unique and many animals are endemic. Here you will find amongst others the highly endangered African wild dog, lions, leopards and cheetahs. Also giraffes and many antelope species can be viewed. The humid Delta, which forms part of the Kalahari, is also home to elephant, buffalo, hippo, crocodile, etc. The Kalahari and especially the Okavango Delta is a bird’s paradise and thus extremely attractive for ornithologists. Especially the large raptors, ostriches and numerous social weavers that build photogenic nest colonies are worth mentioning.

The Kalahari is also home to the San, who have been living in the area for approximately 60.000 years inhabiting most of southern Africa. Also the San, who until today kept most of their traditional culture, are astonishingly well-adapted to the harsh life in the semi desert. They know about 1000 different useful plants and are known worldwide as masters in hunting and tracking.

Kalahari Hotels
Below is a small selection of the Kalahari hotels we offer on our Namibia holidays. If the hotel you require is not listed, just give us a call. 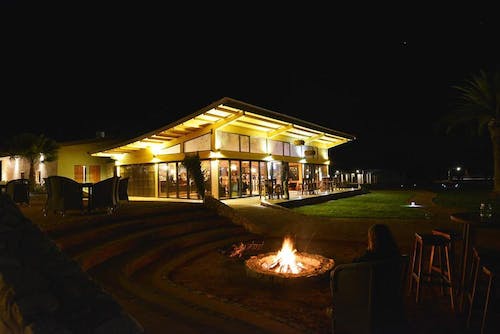