Centred upon three volcanoes –Tongariro, Ngauruhoe and Ruapehu –Tongariro National Park is home to some of New Zealand’s most dramatic landscapes. Tongariro became New Zealand’s first national park in 1887. Just over one hundred years later, the park was awarded dual UNESCO World Heritage status for both its cultural significance to the M?ori people, as well as its outstanding natural features.

The 80,000-hectare park is a spectacular showcase of volcanic wonders including emerald lakes, old lava flows, steaming craters, colourful silica terraces and peculiar alpine gardens. It is an environment of staggering beauty and diversity.

Three volcanoes – Ruapehu, Ngauruhoe and Tongariro – mark the southern limits of the Taupo Volcanic Zone, the horseshoe-shaped series of volcanic phenomena that make up the Pacific Ocean’s ‘Ring of Fire’.

Volcanic activity started here around two million years ago and continues to this day. Ruapehu and Tongariro, which date back before the last ice age, are two of the most active composite volcanoes in the world, with Ruapehu last erupting in 1996. Ngauruhoe – geologically considered a ‘vent’ – last erupted in 1975.

Best of New Zealand By Motorhome

Best of the North By Motorhome

7 Nights from Call Us

Below is a selection of our Auckland hotel's in New Zealand. If you do not see one that you prefer below then please ask your TripsBeyond Specialist. 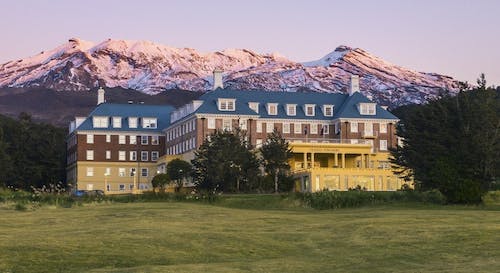