If the USA could have a “greatest hits” for a single state, it just might be Ohio. All your favourite things about the USA — idyllic scenery, hearty cuisine, professional sports, even rock ‘n roll — have a home here. This Midwestern state borders Lake Erie to the north and the Ohio River to the south with diverse people, places and experiences waiting in between. Three major urban centers – Cleveland, Columbus and Cincinnati – offer arts, culture, music, cuisine and spirits, but authentic experiences abound across the state. For families, there are top-notch theme parks, aquariums and zoos. Outdoors enthusiasts can hike, bike, paddle and camp amid thick forests and sandstone cliffs, or on the shores of Lake Erie. Sports lovers have their choice of professional baseball, football, soccer, hockey and basketball.
And when you’re hungry, Ohio delivers with cuisine ranging from regional comfort food to award-winning restaurants.

There are three large urban centres in Ohio, each with its own personality. In the state capital of Columbus, history and culture thrive at places such as the historic German Village, Short North Arts District, Center of Science and Industry (COSI) and Columbus Museum of Art.

From Theme Park Rides to Nature Time
Thrill seekers will find endless loops, towering hills and high-speed tracks at Ohio’s two major amusement parks, Cedar Point and Kings Island. There are plenty of rides and attractions for families and little ones, too.

Prefer more low-speed adventures? Play on the beaches of Lake Erie, discover Lake Erie Islands by boat or escape to Ohio’s sprawling nature parks. Cuyahoga Valley National Park has more than 200 kilometers of hiking and biking trails, opportunities for canoeing and camping, and the Cuyahoga Valley Scenic Railroad train ride. In southeastern Ohio, nature and time have carved the sandstone of the Hocking Hills region into stunning rock formations, waterfalls and valleys ideal for hiking, zip lining and paddling.

Diverse Culinary Landscape
With more than 300 wineries, 300 craft breweries and dining options ranging from casual favorites to fancier fare, Ohio is a foodie’s delight. Sample regional specialties such as Cincinnati-style chili, served on hot dogs or atop a pile of spaghetti, or goetta, a breakfast sausage with flavors that attest to the region’s German heritage. Tempt your appetite along food trails dedicated to donuts, coffee, beer, cocktails, burgers and the state’s famous Buckeye candies – peanut butter balls dipped in chocolate. 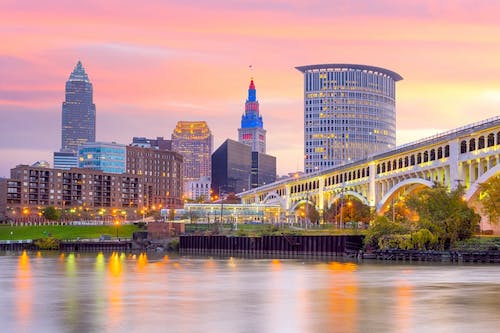