Coastal Astoria seems like it was plucked right out of a storybook.
With Victorian-era homes etched into hills overlooking the Columbia River, this picturesque settlement (the oldest west of the Rockies) is a port city with Scandinavian flavour. Surrounded by forests, boasting three rivers and situated a stone’s throw away from the Pacific, Astoria is a fishing village-meets-Victoriana, chocablock with forts, museums and great local brews.

The Astoria Downtown Historic District alone includes dozens of buildings on the National Register of Historic Places. Visit the Flavel House Museum, an 1885 Queen Anne-style house that was home to a Columbia River bar pilot and an early millionaire. Take in a show at the Liberty Theater, a beautifully restored Italianate theatre first built in 1925 and the host of the annual Astoria International Film Festival. Climb the 125-foot Astoria Column, built in 1926 and offering breathtaking, 360-degree views of the river, ocean and town. Learn about the Corps of Discovery at nearby Fort Clatsop, where Lewis and Clark spent the winter of 1805-06.
You’ll get an eyeful of the mighty Columbia as you drive across the 4.1-mile Astoria-Megler Bridge, a steel cantilever through truss bridge soaring over the river (the longest continuous truss bridge in North America). Visit the Columbia River Maritime Museum for an interactive history lesson about the treacherous Columbia Bar, the history of the salmon industry and more. The nearby Barbey Maritime Center is an homage to the art of wooden boat building. Stroll the waterfront along the Astoria Riverwalk trail for views of large freighters passing under the span of the bridge.

Ride the historic Trolley “Old 300” along the scenic Astoria Riverfront!  Old 300 was built in 1913 by the American Car Company of St. Louis, Mo., for the San Antonio Traction Company in Texas. The Trolley is operated and maintained by a volunteer crew 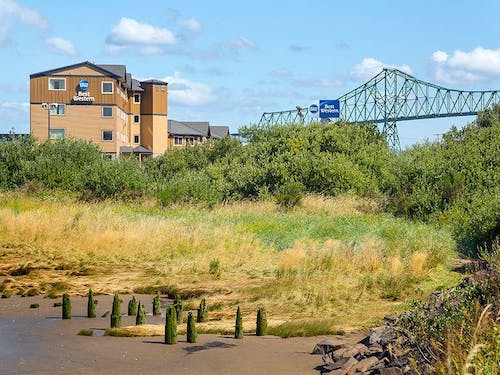