Moreton Island is the third largest sand island in the world and located only 40 kilometres north-east of Brisbane. The Island consists entirely of sand, apart from a small area of sandstone and rhyolite at Cape Moreton, which has built up over the past 400,000 years.
It is also home to the highest coastal sand dune in the world, Mount Tempest, which at 285 metres provides 360 degrees of breath-taking views. Moreton Island is one of the least polluted and least disturbed coastal environments along the Queensland/New South Wales coast.

Moorgumpin meaning 'place of sandhills' is the Aboriginal name for Moreton Island. The Indigenous people of Moorgumpin are known as the Ngugi. Moorgumpin lies within the area referred to as Quandamooka. Quandamooka is commonly defined as the Moreton Bay region.
Extensive site surveys have established that the Ngugi people lived permanently on the Island, maintaining a marine-based lifestyle for over 2000 years. Fish, shellfish, dugong, turtle and crustaceans formed a major portion of their diet, which was supplemented by the bungwall fern (Blechnum indicum), midyim berries (Austromyrtus dulcis), pandanus and honey.
One of the most rewarding experiences on Moreton Island is finding the Champagne Pools. Located on Northe-Easetrn tip of Queensland's Moreton Island, the spot gets its name from the sparkling ‘champagne’ effect created as the ocean wave’s crash over the volcanic rock and sandstone break wall.
With water foam and bubbles, the Champagne Pools are almost a natural sandy bottomed sea bubble bath. Because the 'volcanic break wall' sits higher then the water level, a protected pool often forms on the inside of the rocks, making it a great place to have a swim. The waves crashing over the wall also create a great photo opportunity and are frequently visited by guests wanting to see this natural spectacle. 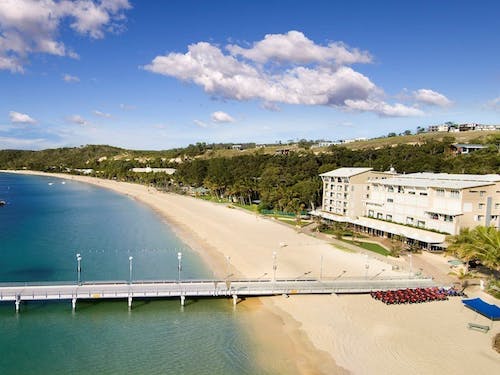