Coffs Harbour is a city on the north coast of New South Wales, Australia. It’s known for its beaches, the Big Banana monument and amusement park. In the waters off Coffs Harbour Marina is the Solitary Islands Marine Park, home to abundant wildlife, seasonal whales and coral reefs. Just east is the Muttonbird Island Nature Reserve, with its large population of wedge-tailed shearwater birds and learning centre.

South along the coast is Jetty Beach, with its protected bay and old jetty, Jetty Foreshores Park, and the Jetty Strip dotted with restaurants. Further south is Bongil Bongil National Park, known for its fishing sites, trails and long stretches of coastline. Just inland, Coffs Harbour Butterfly House features a glasshouse with native butterflies, insects and a maze. West from here is Dorrigo National Park, known for its treetop Skywalk lookout and a walk through a rock canyon, rainforest and behind Crystal Shower Falls. To its north, walking and cycling trails weave through Cascade National Park, home to rare frogs and lyrebirds. With the iconic Big Banana, stunning beaches, a marine sanctuary and more, Coffs Harbour is teeming with great attractions. The seaside city, at the heart of the beautiful Coffs Coast, is a fun destination for family holidays and memorable adventures, from bushwalking to whale watching.

You’ll discover spectacular views from the lofty Forest Sky Pier at Sealy Lookout, a short drive from the city through hillside banana plantations. The wheelchair-accessible platform extends almost 22 metres over rainforest escarpment. In the emerald rainforest are walking trails of various length. The vistas from Muttonbird Island are splendid, too. The harbour breakwater bridges the nature reserve where wedge-tailed shearwaters nest. In the local Gumbaynggir Aboriginal language, the sacred island is called Giidany Miirlarl after a Dreaming story about the moon being its guardian.
With breathtaking views of the Solitary Islands Marine Park, the Eastern Side lookout on the island is a top vantage point for whale watching. You can explore the underwater world of the marine park with Jetty Dive, or take a boat tour to see humpback whales at play between May and November.

Below is a small selection the Coffs Harbour hotels we offer on our Australia holidays. If the hotel you want is not listed, just give us a call. 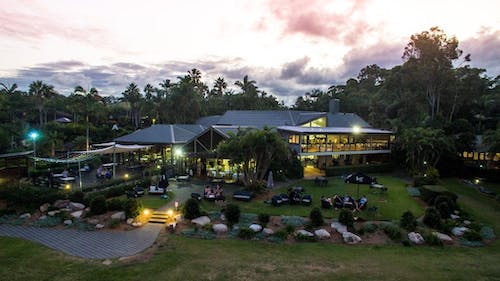 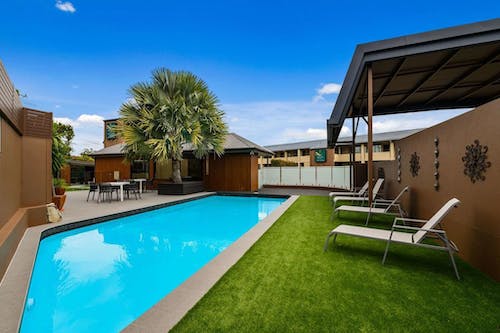